Like all of us, I found myself quickly addicted to the game 2048.  Today, thanks to the Make Your Own 2048 course on Udacity.com, I've created my own variant, dubbed "2". 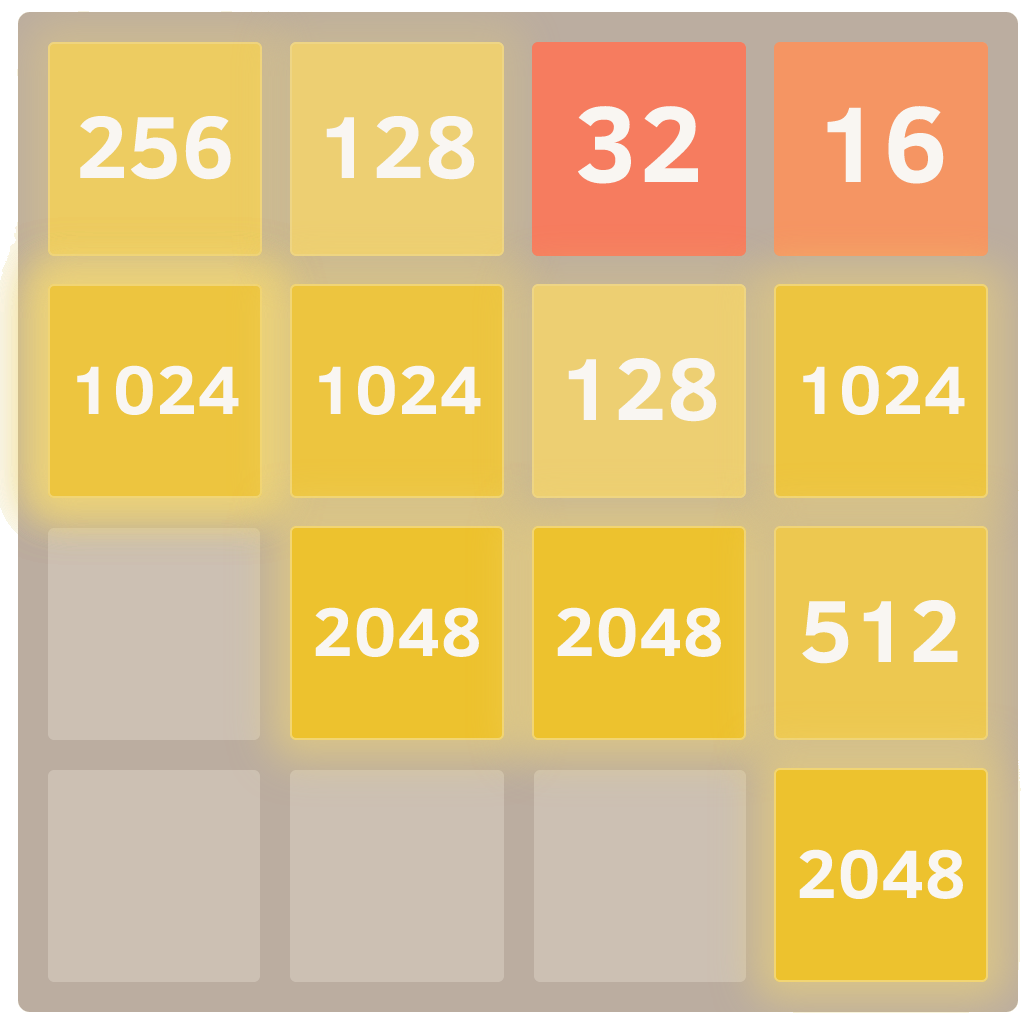 Not surprisingly I've contracted Kinect fever :) From the moment I heard about the Kinect I knew it would be perfect for a Theremin simulator. Well, it turns out it's not perfect, but it is super fun.

How does the interface work?
When you step in front of the Kinect controller you see a contour map of yourself in gray. Once you position your hands before you they are detected and mapped to corresponding pitch (right hand z-axis), volume (left hand y-axis) and modulation (left hand x-axis). The color hue represents the pitch where C is red, D is orange, etc. The brightness of the colors represents the volume, so soft sounds are very faint where loud sounds are bright.

Describe the gear you're using?
Aside from a Kinect controller and a PC, no special hardware is needed, unlike the Wii Theremin.
I wrote the code in C++ for Windows using the C driver package written by Stijn Kuipers / "Zephod". The program uses only the 3D depth information to detect where the performer's hands are in space, then sends corresponding MIDI messages for pitch bend, volume and modulation. I use Maple Virtual MIDI Cable to route the messages to Absynth 5.0 software synthesizer by Native Instruments. Rather than sending distinct Note On / Note Off messages, the program sends a single Note On at startup and subsequently sends only Pitch Bend messages based on your hand position. Most software synthesizers don't support fluid multi-octave pitch bend, but Absynth handles this with grace.

So what's wrong with Kinect?
Don't get me wrong, the Kinect is a great device - it enables applications like this where the user doesn't need to hold anything or don special gloves to control the system. However, unlike the Wii Theremin, there are some limitations to the Kinect hardware that make it more difficult to play musically. First off, the Kinect controller has significant latency (time between the user's action and the delivery of the data). I haven't done any precise measurements but it's probably 200 to 300 milliseconds, which is really tricky for an instrument that depends so heavily on player feedback to target a specific pitch. Even if you can position your hands precisely by muscle memory you need to hit the note a fraction of a second before you want the note to sound, which makes even moderately fast musical passages difficult to play.

Secondly, the Kinect delivers data frames just 30 times per second so when playing a smooth glissando (slide) between two notes -- a common element in Theremin performance -- the gaps between pitches are fairly audible. The Wii Theremin, on the other hand, samples data 100 times per second so glissandos are very smooth.

When can I download and play with it?
Currently I have no idea when or if I'll share the code. I'm investigating product and performance opportunities so I'm not sharing the source at this point, sorry :(

Where have you been since creating the Wii Theremin two years ago?
Working on my other big work in progress.
Posted by Ken Moore at 11:53 AM 8 comments:

This is was my submission for NPR's National Caroling Party. The gist is that people submit their own recordings of a common Christmas carol, and NPR blends selections together into the most diverse set of voices, instruments and interpretations you could imagine. When I heard about this I knew the Wii Theremin would be a perfect 'voice' to add to the choir.

[Wondering what the heck is going on here? See my earlier post Wii Theremin - How It Works]

I'm sure they're inundated with very qualified entries, but my fingers are crossed that they'll pick mine to share with their listeners.

UPDATE: I heard back from the producer - I made the cut! So, if playing this video over and over just isn't enough Santa Claus is Coming to Town on the Wii Theremin for you, then be sure to tune in to All Things Considered on Sunday, December 21st to hear it again!

Click here for the mp3 of the Theremin solo.

Click here for the mp3 of the Theremin with piano.

PS - hugs and kisses to my wife, Kali, who lit, filmed and tolerated the many attempts it took to get it (this close to) right.

PPS - I've just gotten a request for Rudolph the Infrared-Nosed Reindeer! However, Kali's eager for me to bust out Tiptoe Through the Tulips next. Should be a fun 2009 :)
Posted by Ken Moore at 6:20 AM 9 comments:

A holiday gift for those of you who requested the Doctor Who theme played on my Wii Theremin -- my own original arrangement!

Despite my mad Google Search skillz, I couldn't find a "karaoke" version of the theme without the lead synth, so I decided to create my own.

Over the years the Doctor Who theme has become more and more modern, but to me the triplet rhythm is a little tired and limits the music's edginess -- I broke the mold and adopted a driving sixteenths rhythm reminiscent of Heart's Barracuda. I hope you like it, and I hope the ghosts of Ron Grainer and Delia Derbyshire (who composed the original theme in 1963) don't haunt me too much!


Click here to Download the MP3. It sounds much more pleasant since I recorded the lead with a keyboard, not the tricky Wii Theremin.

Videos of me playing my homemade Wii Theremin.


Credit and many thanks to my wife, Kali, who lit and recorded all my shots and tolerated days of miserable noisemaking!
Posted by Ken Moore at 9:07 PM 3 comments:

Wii Theremin - How It Works

How I constructed a Wii Theremin with a computer, synthesizer and a Wiimote.

The Theremin, invented in 1920 by Russian physicist Léon Theremin, was one of the world's first electronic instruments. It's the only instrument that is played without being touched. The proximity of the hands to the two antennae determines the pitch and volume of the sounds produced.

You've likely heard the eerie Theremin before - they became popular in those 1950's science fiction movie soundtracks that sound so cheesy today.

While Theremins are always a popular attraction, they remain pretty rare (I've only once seen a Theremin -- at a shi-shi company event during the dot com boom). A new Theremin costs about $450, so I'm not likely to get one as a stocking stuffer, but luckily thanks to the Wii and the inspiration of Wii hacking pioneer Johnny Lee I've been able to create my own.

To be precise, I've built a Theremin simulator using a computer, a Roland JV-1080 synthesizer, and a Wiimote (remote controller from the Wii game console).

At just $35, the Wiimote is an AMAZING piece of technology. It has an infrared camera in it which tracks the position up to 4 infrared light sources. So I bought a pair of leather gloves, wired up a couple infrared LEDs to 1.5 volt batteries, and poked an LED through the tip of the index finger of each glove.

Then, I connected my Wiimote to my computer (the Wiimote also supports Bluetooth connections): building on top of Brian Peek's Wiimote hacking software library, I wrote a program which detects the two infrared gloves and converts the vertical position of the left hand to volume, and converts the horizontal position of the right hand to pitch. That information is then sent via MIDI to the synthesizer which creates the actual sound.

One awesome thing about this design is that I'm not restricted to the sine wave sound of a traditional Theremin so the sonic possibilities are endless. My father-in-law, a Vancouver Washington dentist, suggested I should make it sound like a dental drill :)

I've had a lot of fun creating my Theremin, and I've learned a lot. I think my biggest lesson, though, is that while playing the Theremin is simple in concept, it's VERY difficult to play well.
Posted by Ken Moore at 5:48 PM 17 comments:

How to make an infrared LED light pen

If you want to experiment with Johnny Lee's Wiimote Whiteboard or other Wiimote hacking projects, I recommend starting by making your own IR LED light pen. My design shown here is sturdy, self-contained, cheap and easy to make.

Ken Moore
Ever since I could form complete sentences I've been asking "Wouldn't it be neat if...?!" I love designing and coding to bring my crazy ideas to life.